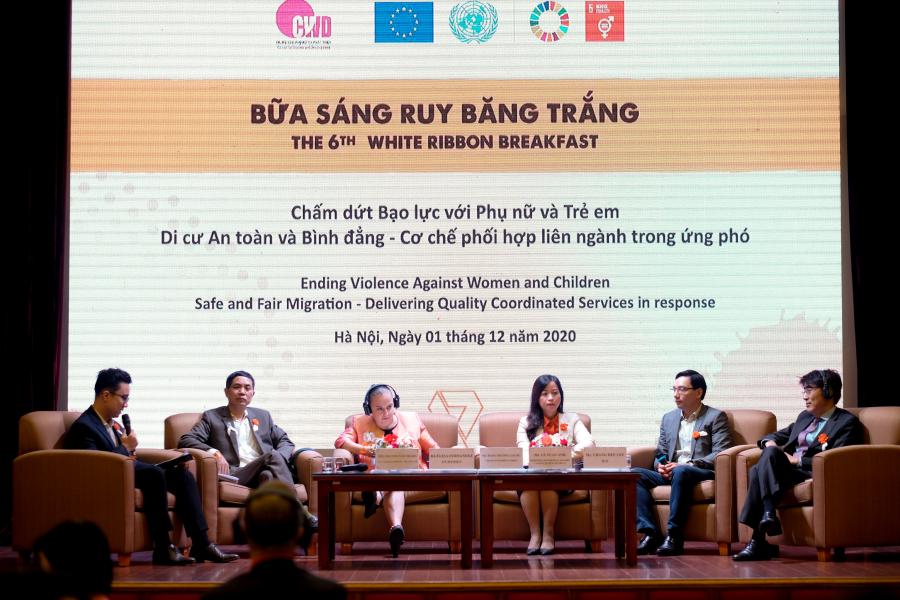 The communication event “The 6th White Ribbon Breakfast - Ending Violence against Women and Children, Safe Migration”, responding to the 16 Days of Activism against Gender-Based Violence with 2020 UNiTE Campaign Theme: "Orange the World: Fund, Respond, Prevent, Collect!", was held by United Nations Entity for Gender Equality and the Empowerment of Women (UN Women) in collaboration with the Vietnam Women's Union, Center for Women and Development (CWD). The event aimed at raising awareness on ending violence against women and girls, promoting the inter-ministerial agency cooperation and collaboration in delivery of the coordinated essential quality services to support the women and children subject to violence and trafficking, including the women migrant workers, toward safe and fair migration for all Vietnamese women migrants.

In his opening remarks at the event, Mr. Chang-Hee Lee - Director of the International Labor Organization (ILO) Vietnam affirmed, that “Discriminating against women migrant workers comes at a cost to humanity and nations and denies their inalienable rights (…) There is growing evidence that not only migrant women but all the society will benefit from the elimination of violence against women. If there is no more fear and worry of the risks of violence and abuse, women migrant workers will be able to work more productively, efficiently and to contribute better to the family and social economy.”

According to the Department of Overseas Labour, Ministry of Labour, Invalids and Social Affairs (MoLISA), as of 2017, there were more than 520,000 Vietnamese people working in more than 40 countries/territories around the world. From 2006 to 2016, each year about 80-100 thousand Vietnamese workers went to work abroad. In 2016 alone, 126,296 workers went to work abroad, of which 37% were female. Data from more than 10 years of collection by Peace House (NBY) when providing counseling services to 14,000 people on issues related to women's rights, gender-based violence prevention shows that 24.5% of issues are related to the prevention of human trafficking and safe migration. Peace House Shelter provided shelters to 1,400 women and children, out of which, 373 people were trafficked, 400 were international migrant women, of whom 66.2% were sexually exploited and abused; 13.46% of women were trafficked for labour purposes, especially, up to 11.2% were exploited for both sex and labour.

Ms. Duong Ngoc Linh, Director of the CWD, which directly manages and operates the Peace Houses, reportedly said that in addition to the barriers of language, culture, law, and in their migration, the migrant workers have faced with numerous challenges including: lack of opportunities to access the formal channels to be dispatched for working overseas, limited chance to learn about the rights of women migrant workers in the destination countries, about the roles of organizations that provide support to workers; absence of information and skills to be able to prevent and protect themselves against trafficking in persons and gender-based violence.

In her remarks delivered at the event, Ms. Elisa Fernandez Saenz, Representative of UN Women Vietnam shared: “women migrant workers contribute significantly to the economy of the destination country as well as the country of origin. However, a great number of them still encounter countless difficulties. Women are more vulnerable to violence, abuse and exploitation throughout their entire migration cycle. Migrant women often find it difficult to access necessary support due to language barriers, migration status or being controlled. To address these situations, each sector needs to be aware of its roles and responsibilities in response to various forms of violence against women and children and trafficking in persons.”

At the event, representatives of key agencies and sectors were engaged in the panel discussion on role and responsibilities of each actor in coordination of the supporting services to women migration, observations and recommendation on strengthening these services in order to ensure the right-based approach for the migrant women. After listening to a true story of a female migrant worker who experienced gender-based violence, abuse and harassment and being supported by the Peace House Shelter, the participants were invited to put together pieces of the coordination puzzles, symbolizing for the supporting services, turn it into a perfect picture embedded with the event's message:

For a prosperous, equal and growing Viet Nam,

Realizing the rights and opportunities of women migrant workers

The event played a significant part in connecting the stakeholders to join effort in prevention and response to gender-based violence, delivering the message: Each agency/sector is an indispensable piece in the complete picture on elimination of violence against women and children. Violence cannot be resolved if the pieces were not connected, or any among them was missing.