A New Vietnamese Generation Free Of HIV, Hepatitis B And Syphilis Is On The Way

Viet Nam joined few countries with a National Plan for the Triple Elimination of Mother to Child Transmission of HIV, Hepatitis B and Syphilis for 2018-2030.

In 2018, Viet Nam reached new milestones towards the end of AIDS as a public health threat, with national plans for a new Vietnamese generation that is free of HIV, Hepatitis B and Syphilis and expanded HIV testing and prevention services, two key results of the UN HIV Thematic Group’s joint advocacy and technical and financial support. This will bring people-centered and proven effective interventions to people at risk of HIV, especially pregnant mothers living with HIV, Hepatitis B or Syphilis and Men who have Sex with Men (MSM).

Viet Nam joined the few countries with a National Plan for the Triple Elimination of Mother to Child Transmission of HIV, Hepatitis B and Syphilis for 2018-2030. “In the past few years, the health sector has implemented various highly effective interventions to prevent mother-to-child transmission of HIV, leading to significant reduction of HIV transmission with benefits for families and society” explained Dr. Nguyen Duc Vinh, Director of Maternal and Child Health Department, Ministry of Health. However, many needs remain unmet. The new integrated approach for Triple disease Elimination will allow more pregnant mothers and fathers to timely protect their child. He further shared that “the health sector will promote continuous care and universal healthcare coverage, including defining essential intervention packages and ensuring access to them when needed, and ensuring the sustainability of the mother-to-child transmission programme through enhanced coordination, integration and service delivery…We highly appreciated the sound technical and financial support from UNICEF, WHO and UNAIDS to help us develop this National Action Plan and I look forward to receiving further support from the UN and relevant partners”.

HIV testing options, including self-testing, communitybased testing and testing in closed settings were expanded for other key populations at risk of HIV, with joint UN support by WHO, UNAIDS and UNODC. In addition, UN and other partner support contributed to the adoption of a National Action Plan for Pre-Exposure Prophylaxis (PrEP), a new HIV prevention intervention especially effective for MSM, a group with increasing HIV prevalence rate in Viet Nam (currently 12 per cent). As Dr. Phan Thi Thu Huong, Deputy Director General of the Vietnam Authority of HIV/ AIDS Control at MOH summarized, “Innovative approaches recommended by WHO including community-based testing and Pre-Exposure Prophylaxis were piloted in Viet Nam, with strong collaboration between MOH, community-based organizations and UN agencies. Evidence generated from these pilots showed that community-based testing is feasible and can effectively reach undiagnosed key populations. There was also evidence of high demand for PrEP and willingness to pay among key populations especially MSM. These findings informed the development of national policy and guidelines. Continued UN support is needed for scale-up of these high impact interventions to achieve the UN targets and reduce new infections among key populations. The Government of Viet Nam remains committed to achieving the UN 90-90-90 targets and ending AIDS by 2030.” As a result, Viet Nam already moved from an initial pilot of 200 clients on PrEP to over 1,300 by the end of 2018, with goals of 5,600 PrEP clients in key provinces by 2019 and 7,500 by 2020. 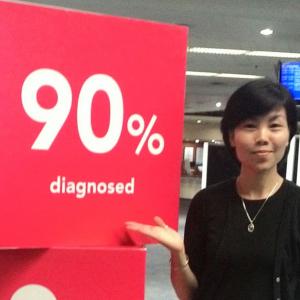